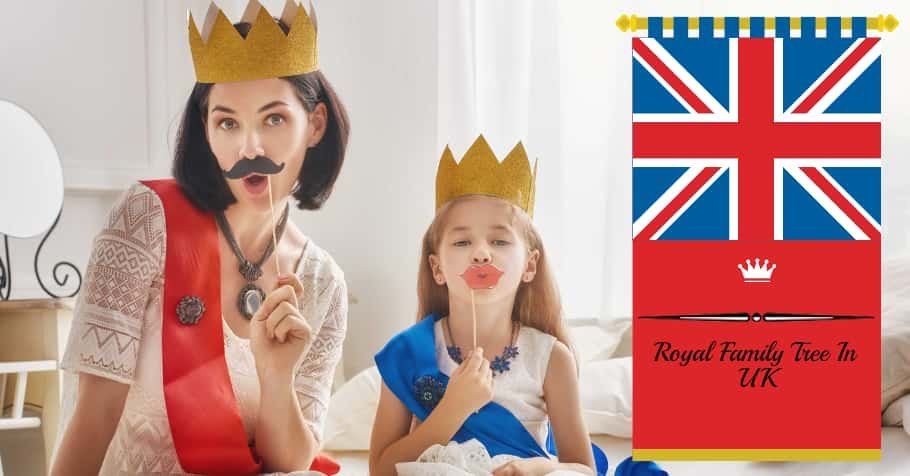 You have even heard about the royal family tree.  In this blog, we will tell you about the UK Royal family Tree. Today I’m going to show you the family tree of the kings and queens of England, Great Britain, and the United Kingdom. I’ll be starting with Alfred the Great and going all the way down to the current monarch, Queen Elizabeth the Second. I’ll be using the European Royal Family Tree Chart, which can be purchased as a poster from the website UsefulCharts.com. In the royal family tree, you can see the royal family’s records.

Now Athelstan did not have any sons so the throne then passed to one of his brothers and then to another brother and then on to some nephews. Basically, it stayed within the family. Eventually, we come to a king called Athelred the Unready. During his reign, England was being attacked quite frequently by Vikings. Eventually, a Danish king named Canute the Great seized the throne and ruled England for almost 20 years.

The last of the original Anglo-Saxon kings to rule England was Saint Edward the Confessor. He didn’t have any sons and on his deathbed. He supposedly named his brother-in-law Harold Godwinson as king. However, Edward had, through his mother, a cousin over in Normandy who claimed that Edward had already promised him the throne. So quite famously, that individual – known to us as William the Conqueror. Invaded England with his Norman army and defeated Harold Godwinson at the Battle of Hastings in 1066.

William the Conqueror was followed by two of his sons. First, William II and then Henry I. Now, Henry I had a son but that son died in an incident known as the white ship disaster, along with several other members of the royal family. This led to a period called the Anarchy because when Henry I died, two different people claimed the throne. One was his daughter, Matilda, and the other was his nephew, Stephen.

Matilda had previously been married to the Holy Roman Emp-er-er so she is often referred to as “Empress Matilda”. Through her second marriage though, she had a son named Henry. And eventually, Henry defeated Stephen and became King Henry II.

This means that every monarch from this point forward was a descendant of both William the Conqueror and Alfred the Great.

Henry II was the first English king to be Lord of Ireland. He was followed first by his son Richard the Lionheart. The famous crusader king, but then by another son, named John. It was during the reign of John that the Magna Carta was signed. You can also see here that he is connected to several important Welsh princes through his daughter Joan.

After John, we get his son Henry III, who had a nice long reign. Note that during his reign, his brother Richard was elected Holy Roman Emperor. Although he was never crowned.

Henry III was followed by Edward I, who conquered Wales. So it was at this point that the title “Prince of Wales” started to be given to the eldest son of the king.

We then get Edward II, and then Edward III. Edward III had a long reign, and therefore when he died, the throne passed to his grandson, Richard II. Richard II was an unpopular king and during his reign. The throne was seized by his cousin Henry IV. We then get Henry V and Henry VI.

So you ended up with the York side, symbolized by the White Rose, and the Lancaster side, symbolized by the red rose. Eventually, the Yorkists won and Edward IV was followed by his young son Edward V. Then Edward IV and his brother mysteriously disappeared after being held in the Tower of London. The two of them became known as the “Princes in the Tower” and their uncle Richard III became king.

Richard III was then defeated by this guy here. Henry VII, through his father, was a member of a Welsh house, but through his mother, was a Lancastrian. He married Edward IV’s daughter, thereby uniting the Yorkists and the Lancastrians and establishing the new House of Tudor.

We then come to one of England’s most well-known kings – King Henry VIII. He was the first English king to also be King of Ireland. But he is perhaps most famous for having had six wives. His first wife was Catherine of Aragon in Spain. She bore him a daughter who would eventually become Queen Mary I. He wanted a son as his heir and because of this, he ended up divorcing Catherine and marrying Anne Boleyn. This sparked the English Reformation and the creation of the Anglican church. The pope famously disagreed with the divorce.

But in the end, Anne Boleyn only bore him a daughter and eventually, Henry had her beheaded. So that he could marry Jane Seymour. Finally, through Jane, he had a son but unfortunately, Jane died shortly. After childbirth, he married a fourth time – to Anne of Cleves. But that marriage was annulled and he married a fifth time – to Catherine Howard. He ended up having her beheaded and he married a sixth time Catherine Parr who was lucky enough to outlive him.

So the way to remember all of that is: divorced, beheaded, died; divorced beheaded, survived. But in the end, all of it was in vain because of Henry VIII’s beloved son. Who became Edward VI, died as a teenager, and therefore, in the end, Henry VIII’s eldest child Mary became queen anyway. After a very short nine-day reign by Lady Jane Grey.

Mary I was nicknamed “Bloody Mary” because, during his reign, she tried to revert England back to Catholicism. She is often confused with Queen Mary of Scots but keeps in mind that these were two different people.

Mary relates to the royal family tree but she has no children. So when Mary died, her sister her half-sister Elizabeth, daughter of Anne Boleyn became Queen, and things went back to Protestantism.

Her reign is known as the Elizabethan Age and it was during her time on the throne that Shakespeare was performing his plays. Elizabeth remembered as the Virgin Queen because she never married and never had any children.

What happened next to the royal family tree when the throne of England passed to the House of Stuart from Scotland. The reason for this is that Henry VIII had a sister named Margaret. Who married the King of Scotland, and it was their line that suddenly became the most senior. Now, Elizabeth had actually had Mary Queen of Scots beheaded for treason. But it was her son, James, who ended up becoming Elizabeth’s heir.

So with James, the thrones of England, Scotland, and Ireland became united. He was known as James VI and I because he was the sixth king James in Scotland but the first King James in England. He was followed by his son Charles I. But Charles I wanted so much power and this led to the English Civil War. Then led to the king being beheaded and the country becoming a Commonwealth for about a decade, ruled primarily by a fellow named Oliver Cromwell.

FamilySearch – Discover Your Ancestors Yourself

Eventually, the monarchy was restored with Charles II, who was then followed by his brother James II. But then a problem arose because James converted to Catholicism and had a son with his second, very Catholic, wife. England and Scotland did not want a Catholic monarchy so a bunch of nobles invited James’s eldest daughter Mary, and her husband William, to seize the throne. Which they did, in what is now remembered as the Glorious Revolution.

William and Mary the members of the royal family tree didn’t have any children. And it was during the reign of Queen Anne, that England and Scotland officially merged to become Great Britain. Now, Queen Anne did have a son but that son died before her. So, after Anne, the throne jumped all the way over here to her closest Protestant heir – a second cousin living in Germany – who then became George I. But keep in mind that George I was indeed a descendant of the earlier monarchs through a maternal line.

The only line that was more senior was the one through James’s son, known as the Old Pretender. But by this point, parliament had made a law barring his line and any other Catholic line from inheriting the throne. Thus the throne went to this new house – the House of Hanover.

Now, there were several attempts by the followers of James, known as the Jack-o-bites, to restore that line but all of those attempts failed. If curious to see how history would have gone had the Jack-o-bites succeeded, I have a separate video on that topic, which I’ll link to in the description.

So after George I, we get George II, and then George III. It was during the reign of George III, that Great Britain officially merged with Ireland to become the United Kingdom. But George III is perhaps best remembered for two things: for losing the American colonies and for going mad in his later years. He was succeeded by his son George IV. George IV had a daughter who died in childbirth and thus after him. The throne passed to William IV and then on to the daughter of another brother, who became Queen Victoria.

Queen Victoria was one of the longest-reigning monarchs in British history and it was during her tenure that the British Empire reached its peak. She married Prince Albert from the House of Saxe-Coburg & Gotha. Therefore after her, we once again get a new royal house.

Her son Edward VII was followed by his son George V. George V was king during World War One and during that war, because the UK was fighting against Germany. They changed the name of the royal house to a less German-sounding name and that’s why today the royal house is known as the House of Windsor. It was also during the reign of George V that most of Ireland started down the path towards their independence.

George V who is a member of the royal family tree was succeeded by his son Edward VIII. But Edward VIII reigned less than a year because he wanted to marry an American named Wallis Simpson, which was a very unpopular thing to do. So he ended up abdicating and his younger brother became George VI. George VI reigned until 1952, and because he had only daughters, he was followed by a female monarch. The current queen, Elizabeth II, is currently in her 68th year on the throne. He is an important member of the royal family tree in the UK.

She will likely be followed by her son Charles, who would then become King Charles III, although he might choose to reign as George VII instead. After that, we’re likely to a King William V and then a King George VII or VIII. Now, technically, the name of the royal house should change when Charles becomes king. But I think it’s likely that he will stick with the name Windsor, based on his mother’s wishes.

So, that was a look at every king and queen of England, Great Britain, and the UK, from Alfred the Great to Queen Elizabeth II. Once again, if you’d like to see the tree of some of the earlier Scottish monarchs. I’ve got a separate video on that. If you want to buy the poster, you can head over to my website Useful Charts dot com.